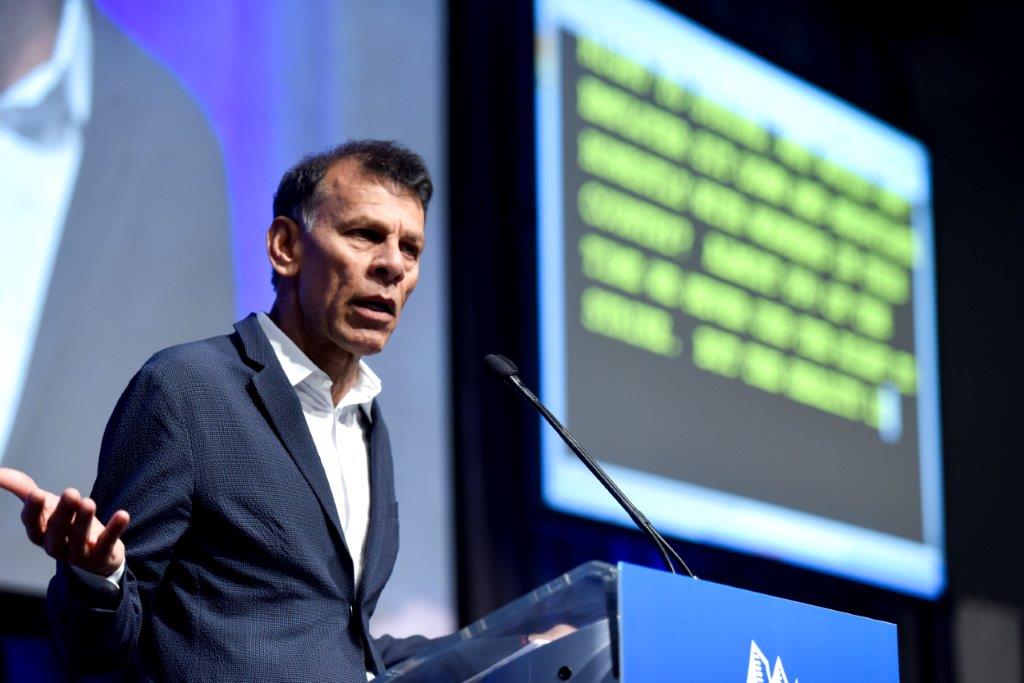 Those who had the pleasure of taking part in MoveUP’s Convention back in early November had the fortune of listening to Canadian Labour Congress President Hassan Yussuf deliver a passionate speech on the importance of universal PharmaCare..

While it may have felt like déjà vu for some of MoveUP’s delegates at the BC Federation of Labour Convention on Tuesday morning, listening to Yussuff was just as inspiring as it was just less than a month ago when he spoke to MoveUP members.

Among the topics that Yussuff spoke on included the importance of supporting the CUPW and their dispute against Canada Post, particularly with the federal government attempting to legislate them back to work. Yussuff mentioned how the right to strike is a fundamental right and that we must defend it every time a government intervenes as without a right to strike, there would be no incentive for an employer to sit down and negotiate honestly.

Yussuff then spoke about pay equity and the work that the labour movement has done to make the federal government move on this issue. The work here, however, is not done, and there is a need to ensure that the government’s next budget actually commits the money required to make sure pay equity happens.

Paid leave for victims of domestic violence was also a hot topic and Yussuff talks about the advancements made in provinces such as Manitoba, Ontario, PEI, New Brunswick and Newfoundland.

Finally, in a topic familiar to those who attended MoveUP’s Convention, Yussuff spoke about the critical need for a universal PharmaCare. It is simply not enough for PharmaCare to fill the gaps. It needs to be universal. Pharmaceutical companies have a monopoly on our nation, and we need to end that monopoly once and for all. In Canada, we have the third-highest drug cost in the world behind Switzerland and the United States. Studies have been done to show that a single-payer Pharmacare system can save between $4-11 billion.

The public can voice their support for a universal PharmaCare by texting ‘pharmacare’ to 343-800-1413.

Prior to Yussuff taking the stage, the delegates debated Resolution 27, which would have the BCFED lobby provincial and federal government to develop and implement a universal prescription drug coverage plan. The resolution was referred back to the Committee in order to put a time limit on its implementation.

Scheduled to speak on Tuesday morning was B.C. Premier John Horgan but business in the legislature would force a rescheduling to Wednesday afternoon. Premier Horgan would have been heartened to hear the strong support for Community Benefits Agreement that came from delegates, particularly from tradeswomen and First Nations, which led to the carrying of Resolution 51 in support of the application and expansion of the Community Benefits Agreement on publicly-funded infrastructure projects.

The recommendations of the Apprentice & Skills Training Working Group were also adopted, and Resolution 3 (compulsory trades certification) coming from the group was carried. 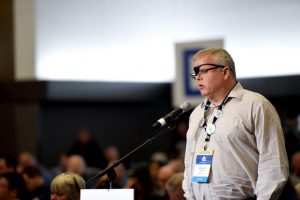 The Executive Council Report was also delivered and adopted along with their recommendations to Convention which can be found on page 54 of the Convention book. During that discussion, MoveUP President David Black spoke on the importance of organizing and mentioned one of MoveUP’s newest members – the WAVAW Rape Crisis Centre – and encouraged delegates to support their Giving Tuesday campaign.

The afternoon session kicked off with Kevin Rebeck, President of the Manitoba Federation of Labour. Kevin, spoke about the advances the province was able to make while working with an NDP government up until they time the Conservatives won power in 2016.

The successes included: introducing domestic violence leave legislation, the first of its kind in Canada;  recognizing post-traumatic stress disorder as a work-related occupational disease for all workers and not just limited to specific occupations; and dealing with claims suppressions and, while not able to eliminate the rate model entirely, have balanced it by adding Safe Work Manitoba, the prevention arm of the WCB.

Successes are coming few and far between now, he lamented, with the Conservatives in power who he mentioned recently gutted the advisory committee on health and safety that was made up of business and labour representatives. They’re also fighting the government imposing restrictions on collective bargaining that would limit public sector wage increases in the first and second year of a new contract to 0 per cent, 0.75 per cent in year 3, and 1 per cent in year 4. The case will be heard in court in November.

Kevin also spoke about the upcoming 100-year anniversary of the Winnipeg General Strike of 1919, the lessons from that strike, and the upcoming celebrations to be held in the province.

The Women’s Rights Committee Report and its recommendations were carried, and Resolution 148A composite to cover 148 and 150 (amendment to Employment Standards Act / paid leave for domestic violence) was carried.

During the afternoon session, the BCFED also handed out the Joy Langan Social Justice Award. Presented at each constitutional convention of the BCFED since 2010 in honour of the first female vice-president of the BCFED, the award honours a woman who is a trade unionist, activist and leader in their union and community, dedicated to equity and application of a feminist lens in their union and community work, dedicated to labour activism, and dedicated to advancing democratic principles through political activism or holding elected office.

The award was presented to Diane Wood of BCFORUM and the BCGEU.

Day 2 of the 2018 BCFED Convention in the eyes of MoveUP Executive Board member Bruce Sarvis: 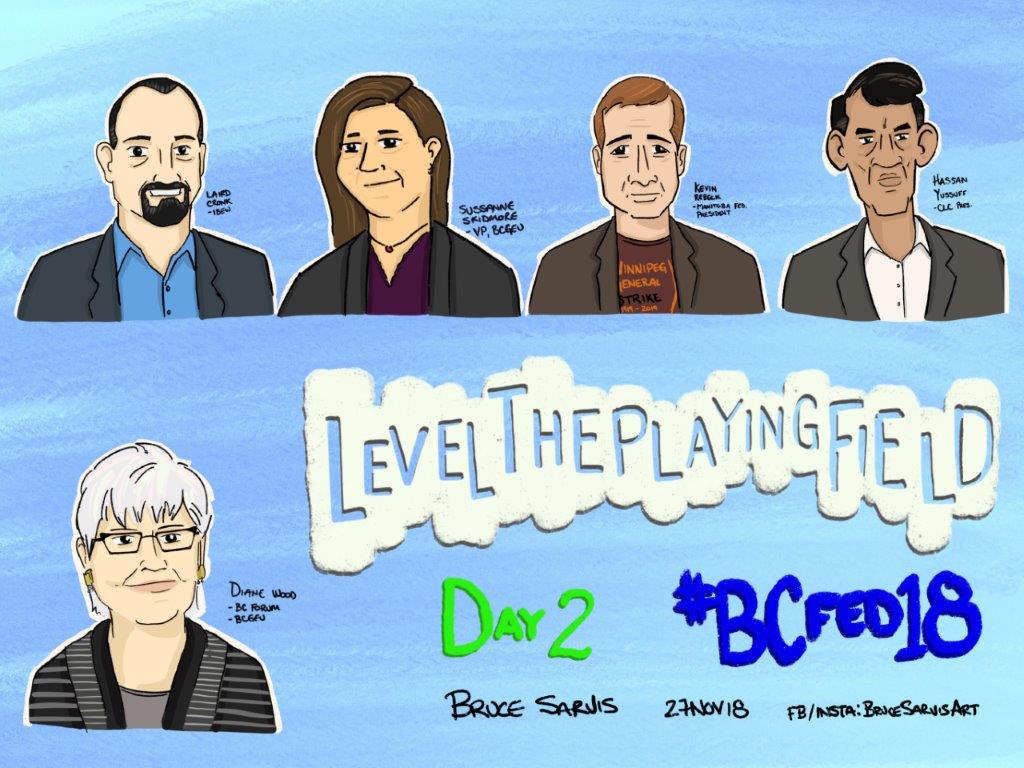