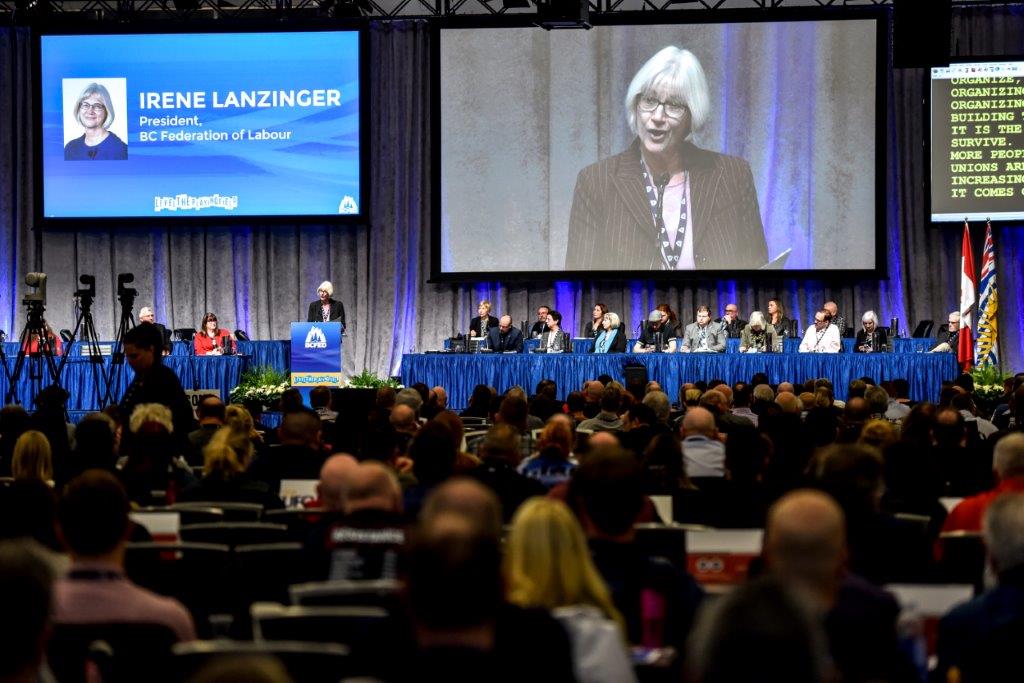 The 2018 BC Federation Labour Convention, the biennial gathering of delegates from across British Columbia’s labour movement including unions and labour councils, got underway on Monday, November 26.

Following an opening an opening prayer by Alec Dan, who welcome the assembled delegates on the unceded territory of the Musqueam, and greetings from Vancouver mayor Kennedy Stewart – who was flanked by several other newly-elected mayors notably Brad West (Port Coquitlam), Michael Hurley (Burnaby), and Darryl Walker (White Rock), the morning’s highlight was the President’s Address delivered by Irene Lanzinger, giving her final opening address in her role as president of the BC Federation of Labour.

In her address, Lanzinger spoke about the decision not to run again knowing the labour movement was in good hands pointing to some of the strides that have been made to make life better for workers over the past several years including moving the province onto a path towards a $15 minimum wage, a path towards $10-a-day childcare, the Community Benefits agreement, and eliminating MSP premiums among others.

Irene also spoke about the lessons that she has learned over her time spent as a champion of the labour movement. Those include:

Say yes when you can. The highest level of engagement is needed in order to keep our democratic labour movement strong and vibrant. Talented people need to be identified and mentored, and space needs to be made for them because sometimes people won’t or can’t speak up.

Organize, organize, organize. Unions are the key to increasing equality, are a poverty reduction strategy, and make the world a better, more equal, and more just place. Progressive forces need to work together and stick together. Coalitions are tough. We don’t always agree. But it’s important to set aside differences, find common ground, and fight for things we believe in

We have to dream big. We have to fight for what workers deserve. Lanzinger discusses how the fight for a $15 minimum wage began at a time when minimum wage was just $10.25 and it was young workers who stepped up and said that it had to be at $15 and that $13.50 or $14 just wasn’t good enough. Their winning line in the campaign was that if you worked full-time, you should not be below the poverty line. This target was achieved because we elected a government that shared our values. She cautioned that we will not get to living wages unless we continued to elect progressive governments.

Governments matter. We need to be guided by fundamental values of integrity and honesty and transparency, but we must never confuse bad behaviour in politics with legitimate positive engagement. It is essential and matters in so many levels. High-quality public service, good union jobs, safety of workers, the quality of water we drink, the quality of food we eat, the quality of air we breathe, all of these things are influenced by decisions governments make. That is also why supporting proportional representation is critical because it creates more representative governments and more cooperative governments. We will never have the world we want unless we engage in political action, and that includes our unions being active, being committed to good decision-making and good leadership and working hard to ensure unions stay strong and vibrant.

Our most fundamental right is to go home healthy and safe at the end of the day. Workers’ rights matter if you’re killed on the job. Hundreds of workers are seriously injured or die every year and we cannot rest unless we are doing every single thing we can to prevent injuries and deaths on the job. When a worker does get injured, that worker must have access to full compensation and rehabilitation.

We are not doing a good job on diversity. We need to do a better job on diversity and being welcome and having inclusive workplace sand having our leadership reflect our membership. Lanzinger talked about all the questions she fielded when she became the first women president of the BCFED but the one question that nobody asked was why did it take so long. There are systematic barriers in place that hinder progress of equity-seeking groups. We need to analyze and work on breaking them down so our leadership reflects our membership in our province

We have power as workers and we should not be afraid to use that power. There is always more of us than there are of them. We need to remember we have the power of the collective. We don’t make gains because the boss decides to give us things. We cannot be afraid to be bold, to take risks, to exercise our power

We have to be bold because we have big problems to solve, namely poverty/inequity and climate change. We have to be a central and committed force in solving both those problems.

We need to build a big movement. We have big problems and we can’t solve them alone. Lessons of history show us the labour movement thrives and grows when we see ourselves as part of larger fight for equality and justice and when we are centrally involved and engaged in the social movement of our time. We have a Federation for all workers, not just union members. We must be a labour movement that cares about justice and fairness, a movement that cares about everyone, and seeks dignity and equality for the most vulnerable among us.

Lanzinger would close her speech with one lasting remark stating that, “it is our values that unite us. Our values can be summarized in one word: Solidarity.” 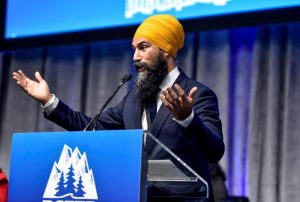 Canada’s NDP leader Jagmeet Singh kicked off the afternoon at the Convention. Jagmeet spoke about what’s at stake in next year’s federal election including and touched on issues such as housing affordability, adequately funding universal healthcare which also includes medication, addressing climate change as well as long-term sustainable jobs. He also talked about the opportunity British Columbians have before them right now with the electoral referendum and the chance to move to a proportional representation system that would truly give power back to the people.

Brian Ramsay, Executive Director of the CFL Players’ Association, talked about the work that the CFLPA was doing with the BCFED to improve medical care, rehabilitation, and wage loss protection for players in the CFL. As it stands now, because these are limited in their collective agreement, taxpayers are on the hook for costs that should be covered by teams.

The final guest speaker on Monday was Cheryl Casimer, Political Executive with First Nations Summit. She applauded the work of labour’s leadership in working with First Nations partners in achieving justice, equality and fairness but talked about the need to continue working with government to bring First Nations up to parity with the general society and the importance of recognizing that First Nations in B.C. are not a burden on the economy, but rather a proven economic driver.

Day 1 of BCFED Convention 2018 as seen by talented artist, and MoveUP Executive Board member, Bruce Sarvis: 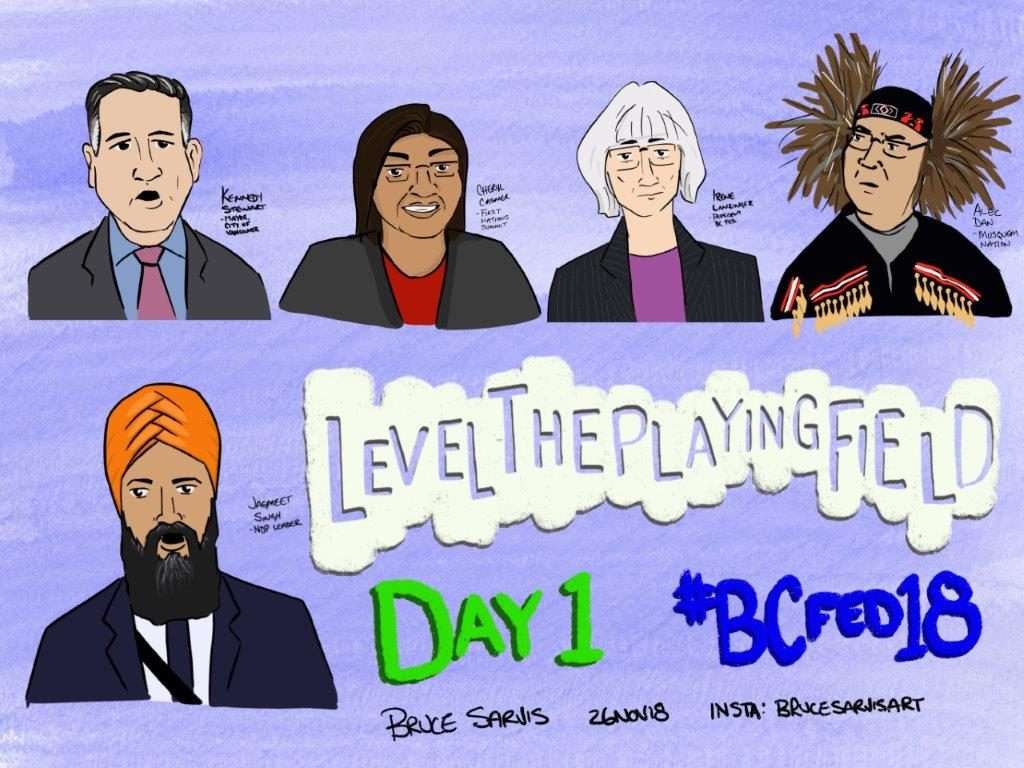