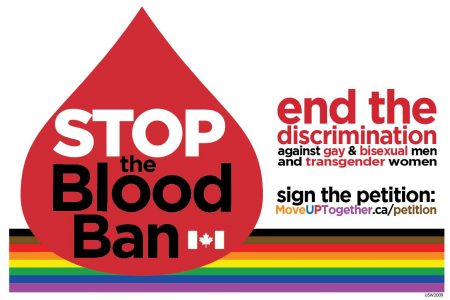 That was the response from MoveUP Executive Board member Gunter Seifert, who is also co-chair of our Human Rights & Multicultural Committee, in response to the news on Wednesday that the Canadian government was reducing ban on gay & bisexual men from donating blood unless they have been celibate from one year to three months.

While the move appears as a step in the right direction, it does not address the underlying issue. It is discriminatory. Whether the ban is 10 years, five years, one year, six months, three months, or one month, it is still discriminatory. It focuses on a particular group’s sexual orientation, and arbitrarily imposes restrictions based on that rather than on scientific fact.

“Prime Minister Justin Trudeau and Canadian Blood Services want to pat themselves on the back, however they are still discriminating against us,” said Gunter, who is a self-identified gay male. “If they truly want to make this right, then they will change to behavioural-based questioning to determine eligibility.”

In 2018, Gunter was one of the major driving forces behind MoveUP’s Human Rights & Multicultural Committee’s campaign to End the Blood Ban. This campaign came three years after Trudeau failed to live up to his 2015 campaign promise to put a complete end to this discriminatory ban on blood donations from men who have sex with men.

The goal of the campaign is simple: End the blood ban, and allow men who have sex with men to adhere to the same rules that everybody else who wishes to donate blood has to follow. Stop the practice of arbitrarily discriminating against gay and bisexual men, and transgender women, when it has been shown there is no scientific reason or detrimental effects to public safety to require such a ban.

Wednesday’s announcement was little more than a band-aid solution. There is still a lot of work to be done. If you are in agreement, please sign our petition and share it with your family and friends.