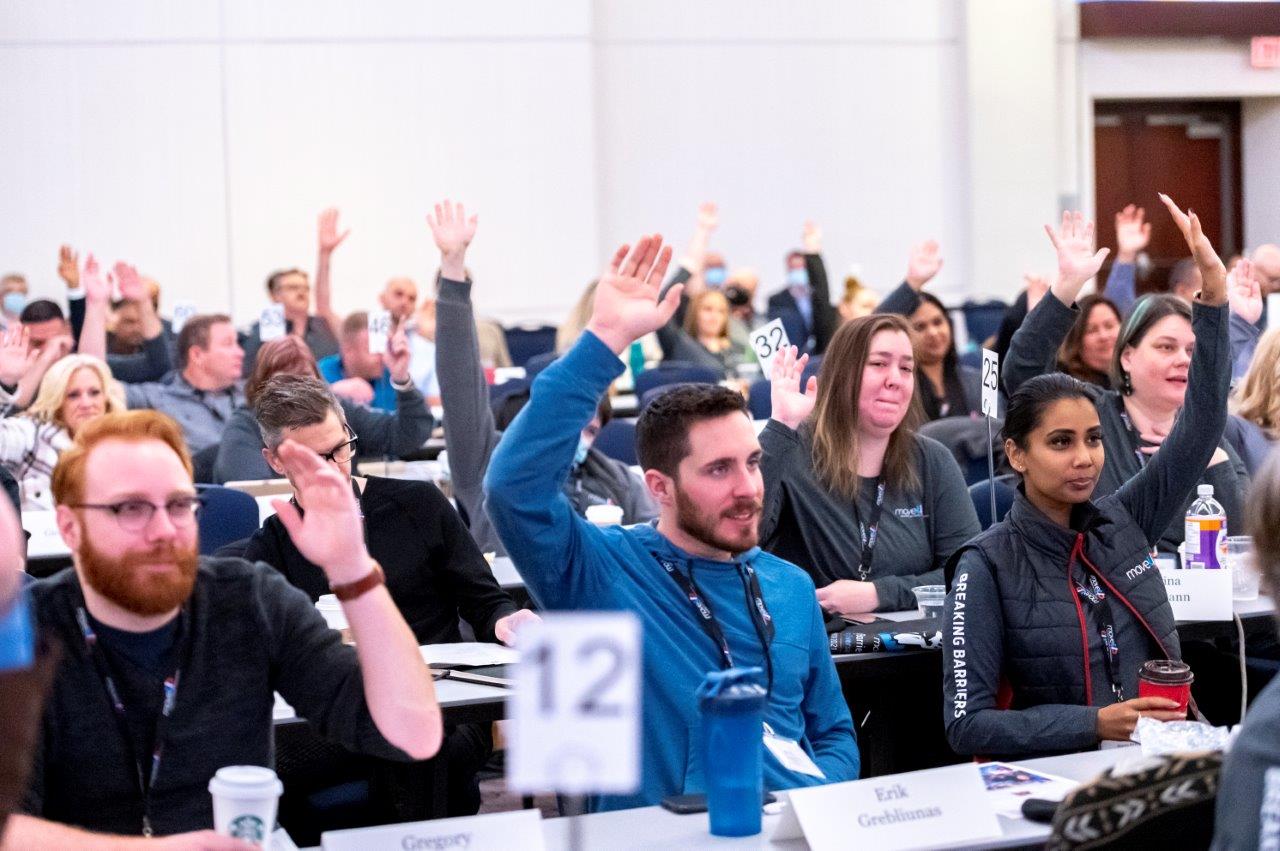 Day 2 of the 2021 Convention picked up right where yesterday left off in terms of energy and emotion.

The day began with greetings from Stephen Von Sychowski, president of the Vancouver & District Labour Council and a former MoveUP member and staff, talking about his history with MoveUP and how our union helped to get him to where he is today in a position to help improve workers’ lives.

He remarked on our Convention’s theme of breaking barriers and embracing diversity and why that is so important for help our union and our movement be more welcoming, more diverse, and strengthen solidarity.

You can watch Stephen von Sychowski’s speech in full here.

BC Premier John Horgan provided a video address to delegates at the Convention. Due to his recent health issues, he was unable to make appear in-person at our Convention but our delegates. The premier talked about the value of unions and organizing, drawing from his experiences from childhood to present day, and thanked the work of MoveUP for not only supporting its members but workers in general.

Horgan took the time to highlight specifically MoveUP’s Driving Public campaign in support of fixing public auto insurance that enabled the government to work to clean up the damage done by the previous BC Liberal government and to introduce the Enhanced Care model that brought down insurance rates while getting people the care they need. He also talked about the government’s CleanBC plan and the work that MoveUP’s members in the Utilities component have in terms of helping provide clean energy to British Columbians.

You can watch Premier Horgan’s speech in full here. MoveUP wishes the premier a speedy recovery.

Newly-elected Canadian Labour Congress President Bea Bruske received a warm welcome from delegates as she delivered her greetings. She talked about recently campaigning in BC during the federal election to support NDP candidates and talking to many people about workers’ issues and how now the hard work at the CLC will be on pressing cabinet ministers on important issues.

She also thanked MoveUP’s work particularly on the discriminatory blood ban and applauded how the work has now led Canadian Blood Services to finally be on the cusp of ending the ban. She also talked about the continuing priorities of the CLC, including issues such as paid sick days, long-term care, national pharmacare, replacing lost jobs with new ones, fixing employment insurance, climate change, education, and affordable housing.

You can watch Bea Bruske’s speech in full here.

BC Federation of Labour President Laird Cronk rounded out the special guest speakers on the second day of Convention providing an update on the accomplishments the BCFED has had over the last three years including work at the Employment Standards Branch dealing with things such as making ESB standards the floor that can’t be undercut by rat unions, child labour protections, and minimum wage, fixing the gaps in the labour code, and at the Workers Compensation Board.

Cronk noted though that the key issues still to come include further reforms of the labour code, including making it easier for people to join unions, as well as more WCB reforms.

You can watch Laird Cronk’s speech in full here.

Resolution debates continued on the second day. The following resolutions were passed at Convention on Day 2:

The following resolutions were defeated at Convention on Day 2:

Resolution C2 (Constitution 9.6 – Dues), which is a motion of recommendation, was referred back to the Committee.

To see the full text of all resolutions, click here.

In the afternoon, delegates broke off into a series of workshops before reconvening for dinner. At the dinner, the winners of the Ardell Brophy Award and the Peter Corren Award, respectively, were announced.

Congratulations go out to Graeme Hutchison, winner of the Ardell Brophy Award, and Vanessa Sharma, winner of the Peter Corren Award. Learn more about them here.