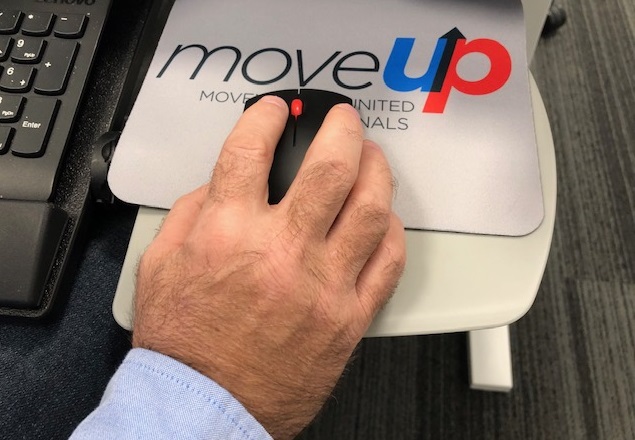 An appeal victory by MoveUP at the Workers’ Compensation Appeal Tribunal (WCAT) on behalf of a member who had developed a right hand-wrist musculoskeletal injury is helping to demonstrate the importance of having a union you can rely on to support you.

John (name changed to respect the privacy of the member) is a MoveUP member who developed his musculoskeletal injury as a direct result of his work. Most of his work tasks requires him to use a computer, meaning he had to repeatedly click and drag with his computer mouse for several hours per day.

The injury that John developed resulted in him not being able to continue working. When he used his mouse, his symptoms worsened. When he was away from work, his symptoms lessened. His condition was pre-existing because he had symptoms over the years, but work activities aggravated the condition.

The test for a condition, or aggravation of a condition, to be accepted by the Workers’ Compensation Board (WCB) is whether work activities played more than an insignificant or trivial role in the development of the condition or aggravation.

In this particular case, the WCB conducted a job site visit and recorded John doing his work activities. A WCB doctor then provided an opinion that the work activities could not have caused or aggravated John’s hand-wrist condition. Based on this assessment, the WCB denied that repetitive computer use played more than an insignificant role in the aggravation of his right hand-wrist condition.

After this initial denial, John contacted MoveUP’s WCB representative – Niki Schnurr – and an appeal of the decision was started. After the denial was confirmed at the first level of appeal – WCB’s Review Division – it was appealed to the final level of appeal, the WCAT.

One of the main points of argument was that John was doing a lot of overtime hours in the months preceding the increase of his hand-wrist symptoms, and that the WCB failed to acknowledge this when first deciding whether to accept his claim or not. Also noteworthy was the fact that John had done the same job previously and had symptoms, was moved to a different position with less computer use and experienced fewer symptoms, and then a few months prior to the disability had re-started at the previous position that aggravated the symptoms.

The WCAT Vice-Chair reasoned that with the ergonomic opinion, MLO, and the temporary association between the progression and severity of John’s symptoms and his employment activities, that John’s pre-existing hand-wrist condition was aggravated by his work activities.

The Vice-Chair further found that this disability would not have occurred in the absence of the duties he performed in the few months leading up to the disability.

The appeal by MoveUP was, therefore, successful and the WCB was ordered to accept the hand-wrist condition as compensable.

MoveUP is pleased with this result and reminds all our members if they are dealing with a similar workplace related injury or aggravation and require additional assistance in their dealing with the WCB to contact our resident WCB representative, Niki Schnurr, by calling our office at 604-299-0378 or 1-800-665-6838.