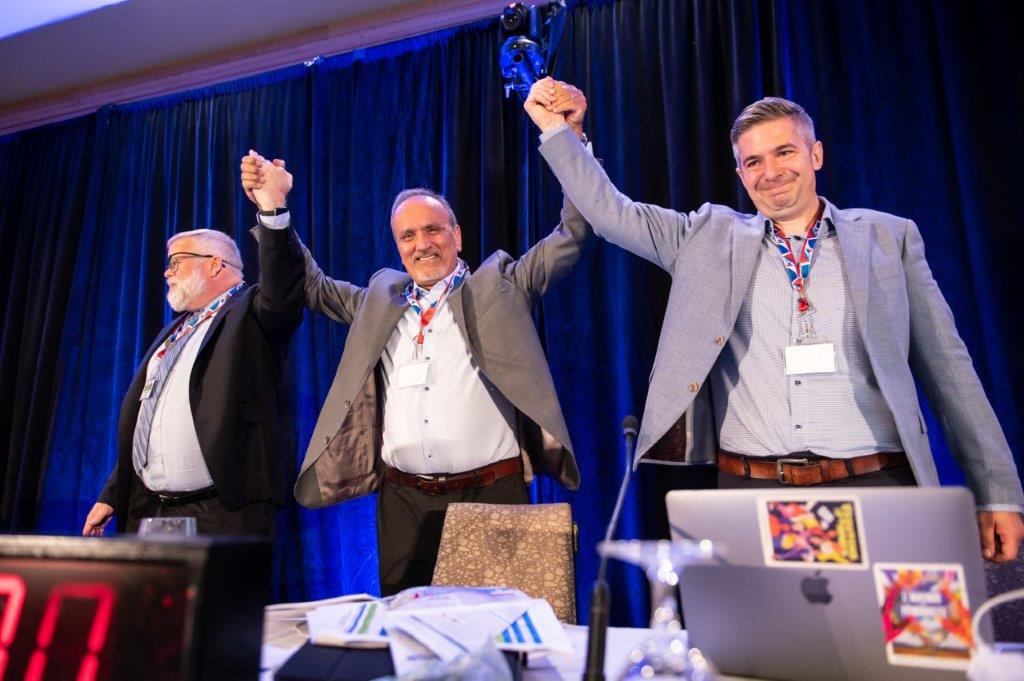 Labour leaders were once again front and centre on the second day of the 7th COPE SEPB Convention.

The Honourable Harry Bains, BC’s Minister of Labour, was one of two featured speakers in the morning.

Bains spoke about the work that the BC NDP have been doing since first coming into power in 2017 to not only support workers’ rights in general but from an equity lens as well, noting advances in the area of child care, removing the server minimum wage, Community Benefit Agreements, as well as introducing paid domestic violence leave which all have a particular impact on women.

He also spoke about advancements on the labour front from the government including increasing the general working age from 12 to 16, introducing five paid sick days, successorship rights, and most recently reintroducing single-step certification into the province.

Bains cautioned that all this work could be undone by another government, noting that the newly-elected leader of the BC Liberals has already vowed to undo single-step certification, and urged the labour movement to never stop fighting or else all the gains that we have achieved, and the ones still to come, would be taken away.

The other featured speaker on the morning of Day 2 was Laird Cronk, President of the BC Federation of Labour (BCFED)

Cronk followed up on the address given by Minister Bains and talked about how the BCFED and its affiliates came together with the opportunity having a progressive government to come to an agreement on core needs and push for those to become reality.

He talked about how the mode shifted from the protest, having to deal with a BC Liberal government that disrespected and ignored workers, to progress, working with a BC NDP government.

Cronk continued by saying that two main priorities at the moment include further changes to the Workers’ Compensation Board to move it away from a cookie-cutter, insurance style, as well as supporting workers that are misclassified and don’t have access to the rights that all workers should be entitled to.

WATCH: Address from Laird Cronk, President of the BC Federation of Labour

The morning also saw delegates debate and pass a number of resolutions related to equity issues and providing directions for our union’s locals. These included:

Esi talked about the power of stories, but also their ability to control the way we build our myths. She then challenged delegates to examine the role of historical and ahistorical in workplace, and offered four specific pieces of advice in our continued work towards equity:

1. Listen to the stories of others;
2. Make no assumptions;
3. Strive for equity beyond symbolism; and
4. Do not take up space meant for others.

Jagmeet Singh, leader of Canada’s NDP, addressed delegates via video message. Jagmeet talked about the struggles that Canadians are facing not only due to the pandemic, but the cost-of-living rising and the fallout from Putin’s war in Ukraine. He talked about the how the NDP is committed to supporting working Canadians, and have already made strides with their Supply and Confidence agreement including bringing in anti-scab legislation, expansion of pharmacare and dental care, and expanding affordable housing.

He ended his message reflecting on being a new father, revealing his child’s name means “limitless” which is the future he wishes to build for all Canadians and that, to do so, it starts and ends with equity.

Delegates continued working on resolutions in the afternoon, successfully passing a number including:

A resolution calling on COPE-SEPB to make an immediate public commitment to fully divest its defence fund and all other investments from all coal, oil, and gas companies and assets, was referred back to committee.

Another resolution related to food insecurity and income disparity was also referred back to committee due to a copy error.

Vice-Presidents for Region 3 and Region 4, and the Canadian Equity Council Report, were also presented their reports to Convention. All written reports can be found here.

Vice-Presidents for Region 3 and Region 4 also presented their reports to Convention. All written reports can be found here.