People at the heart of Community Savings: the union’s credit union 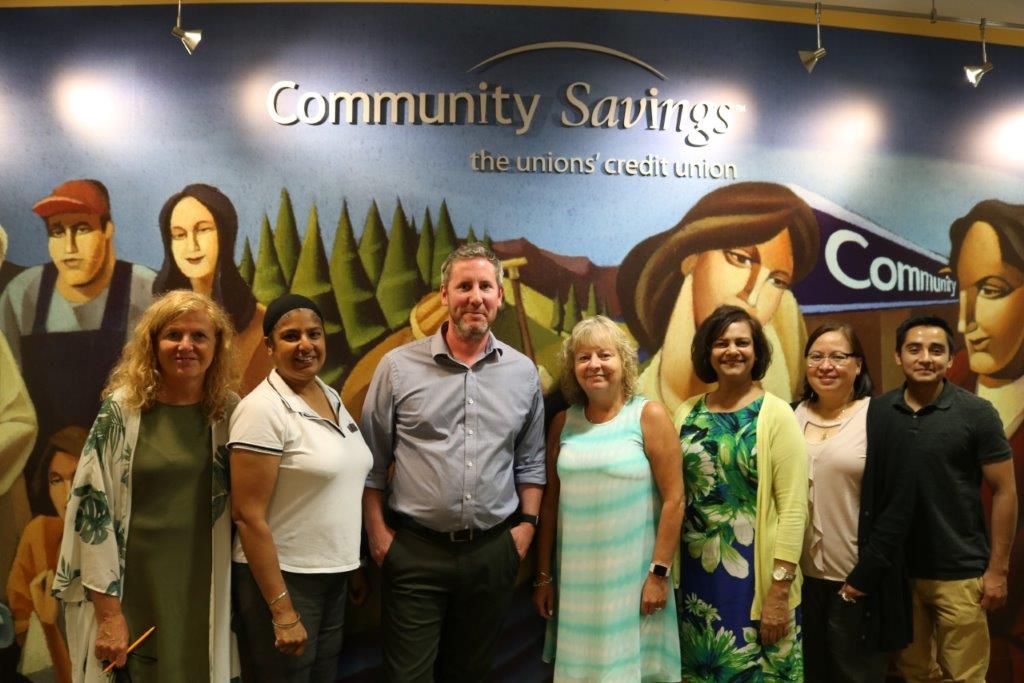 Throughout the illustrious 75-year history of Community Savings Credit Union dating back to 1944 when members of the International Woodworkers of America first founded the I.W.A. (New Westminster) Credit Union, one thing has always remained at the forefront of their focus: people.

More specifically, working people and their families. But that doesn’t just include the members of the credit union. It encapsulates its staff and the community at-large. And while it’s an approach that other financial institutions have seemed to drift away from, Community Savings has found a way to thrive by staying true to their roots.

“We’re clearly the credit union that stayed most closely to that original founding,” explains Mike Schilling, who joined Community Savings as its President & CEO back in January 2019. “We call ourselves the union’s credit union. That means a lot more than you can encapsulate in one phrase.”

Schilling is no stranger to the labour movement. Growing up in Manchester, England – which he describes as the ‘labour heartland’ – his journey working in the financial industry has taken him around the world with stops in Africa, Singapore, India, as well as other parts of Asia and the United States where he gained perspective not only on banking, but work culture.

“The stories I grew up with were about working people, about getting the vote, about those struggles,” explains Schilling. “When I got the opportunity to come to Community Savings, it really struck me that the core values I was brought up with since I was a young boy really resonated with what we try to do and what we believe here.”

In a time where it seems there are those who seek to deepen the divide between employers and unions, Community Savings is proving the opposite is more beneficial both for organizations and for workers.

“Within the credit union sector and within wider business, we want to demonstrate that you can have a fully unionized workforce with a very strong union backing team and have a terrifically successful organization,” said Schilling. “That’s what we’ve built. We’re going to have our best year financially this year. I think it’s important that we demonstrate that’s possible when unions and employers are partners.

“I’m glad our team has the intelligence to get together and collectively bargain for their rights and to hold me, and what I represent as an employer, to the standards that we should live by. I don’t see that as a threat or as a problem. What I end up with is a highly-motivated workforce. This is the best place to work if you want to work in financial services in B.C. in terms of the salary, the benefits, the way you get treated, and the opportunities you get.”

Beyond just the walls of their head office and branches, Community Savings walks their talk in many ways. Schilling makes the distinction between being “pro-union” and “union-built.” The latter is the case with Community Savings. The way he sees it, they’re not just giving back to the labour community because they happen to operate there or because it’s good for marketing, they’re contributing to the community because they are a part of the labour community.

Community Savings annually supports MoveUP’s Bob Derby Memorial Charity Golf Tournament which has raised funds for different charities over its history. They support The Union Protein Project, another union-built institution which works to solve food poverty by linking it to union values and the need for good jobs. This year, they’re working with the BC Centre for Women in the Trades (BCWITT) to sponsor two B.C. women to attend the Women Build Nations Conference in Massachusetts.

One of their prouder projects recently, in conjunction with the BC Labour Heritage Centre, was getting On The Line: A History of the British Columbia Labour Movement published in 2018. Community Savings provided $250K in funding for the book project and helped ensure that copies would be made available for free for secondary school libraries across the province.

“Histories get lost if we don’t tell the stories and remember the stories,” Schilling laments. “These are very important struggles and battles that we’ve all forgotten about and we all take for granted right now.

“We need to hold the ground because rights can be lost as well as won, and I think we’ve seen that in parts of the world where the tide has turned and workers’ rights are being eroded. We’re seeing it right here in Canada with things like precarious work and the gig economy.”

All these projects are in addition to their day-to-day operations where they ensure they keep living their values by doing things the public may not see such as committing to only buying union-made products and supporting union businesses where possible.

“I have a very strong mandate of when I’m spending our members’ money in running this place that we look to buy union and, if we can’t buy union, we buy local, we buy Canadian, we support Canadian jobs,” says Schilling proudly. “Those are the values we’re trying to promote, and the values we should live by. I think that’s what differentiates us.”

But first and foremost, Schilling’s responsibility is running a highly-successful credit union and taking care of the people who make that possible. He’s excited about the innovations that are in store, touting a new online digital banking platform that he calls the best banking platform in Canada set to launch next spring. That being said, he guarantees that Community Savings will always be committed to people first.

As Community Savings looks to compete against the big banks and the new emerging banks, including the likes of tech giants Amazon, Google and Apple getting into the fray, he expects that the people-based approach will continue to set his credit union apart.

And for those in the community who care about their hard-earned money and want to see it ethically invested and go towards supporting these core values and our local economy, Schilling says their friendly staff are ready, willing, and able to discuss your needs and help you get set up whether you prefer to do it in-person, over the phone, or online.

“If you’re a member of Community Savings Credit Union, you get to ensure that your money, which drives the world and drives our local economy, goes into local projects supporting local jobs according to your values, things you can walk down the street and see – affordable houses, schools and daycares, supporting job growth and taking care of the less fortunate in our communities.” says Schilling. “It’s about taking control of your money. You’ve work hard for it. You’ve earned it. Don’t give it to a large bank to do what they want to do with it. Take control, and the best way to do that is at Community Savings.”