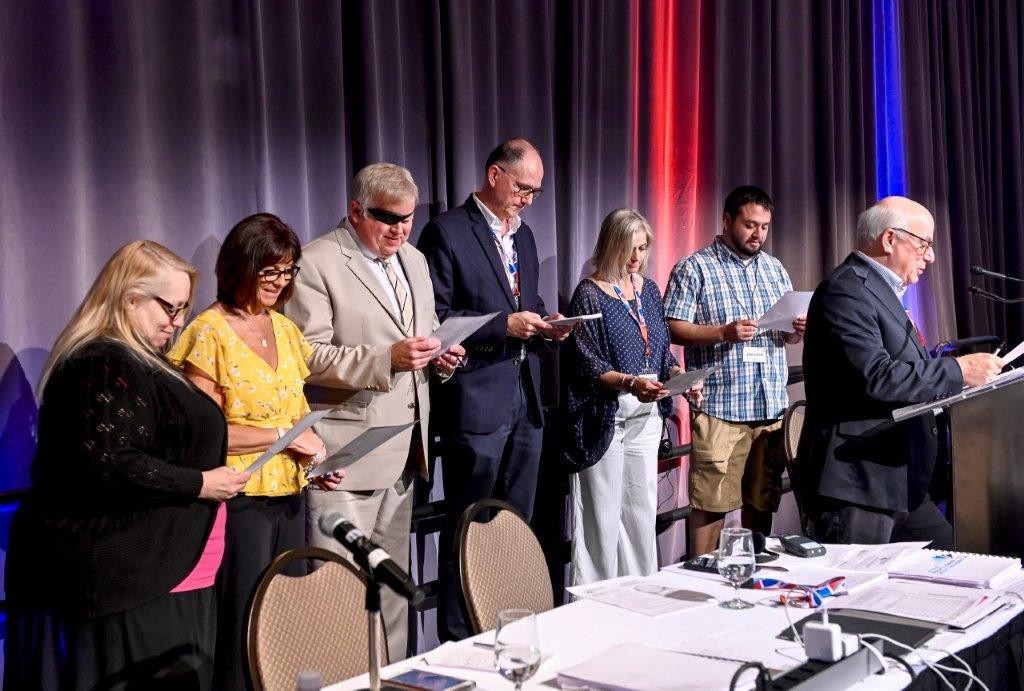 There was no shortage of work to be done and important business left to be attended to on the third and final day of the 6th triennial COPE/SEPB Convention.

The remaining half-day of Convention kicked off with a presentation on Islamophobia by Modjeh Cox, the National Director of Anti-Racism and Human Rights at the Canadian Labour Congress, and Danielle Dubuc, the CLC Director for Women of Colour.

They pointed to events like the murder-suicide of the Walki family facing deportation back to Tanzania, Alan Kurdi, the three-year-old Syrian boy found washed ashore, the Islamic Cultural Centre shooting in Quebec City in 2017, and Amal, the Syrian refugee who died of bullying in Calgary, as reasons why we need to address immigration reform.

They spoke on the CLC’s Anti-Islamophobia Initiative, a ground-breaking project which places Canada’s unions at the forefront and uses their collective expertise to challenge and interrupt Islamophobia as well as xenophobia, anti-immigrant sentiment, and racism. They mentioned how Islamophobia is one of the primary vehicles used by the far-right to broaden the reach of their movement, and further radicalize and uphold white supremacy, and how now is a critical time for Canadas unions to change the narrative.

The objectives of the Anti-Islamophobia Initiatives are to:

They lauded COPE/SEPB was among the first few affiliates to take on the “Islamophobia at Work” as an educational workshop and described how future parts of this initiatives will address how to make workplaces safer for Muslims and, in turn, for all workers.

They talked about some of the vicious attacks that the CLC, and them personally, have received since starting the project, and that has included some within the labour circle as well which indicates the need to work even harder to reach those who don’t have a grasp on Islamophobia.

Among their research highlights show:

The CLC states that actions to address and interrupt Islamophobia must be grounded in pubic education, evidence, coalition building and policy development

More information can be found on the Canadian Labour Congress website.

As the announcement was made for delegates to donate to MoveUP members on the picket line at Westminster Savings Credit Unions Shaughnessy Station branch in Port Coquitlam fighting to save the pension plan for the next generation of workers, representatives from COPE/SEPB locals across the country went up to the microphone to announce their respective pledges. With SEPB Quebec pledging to match the total of all collected from the individual Local pledges, the total came out to $12,576.

The 7th triennial COPE/SEPB Convention will be hosted by Region 4 (MoveUP) in British Columbia in 2022.