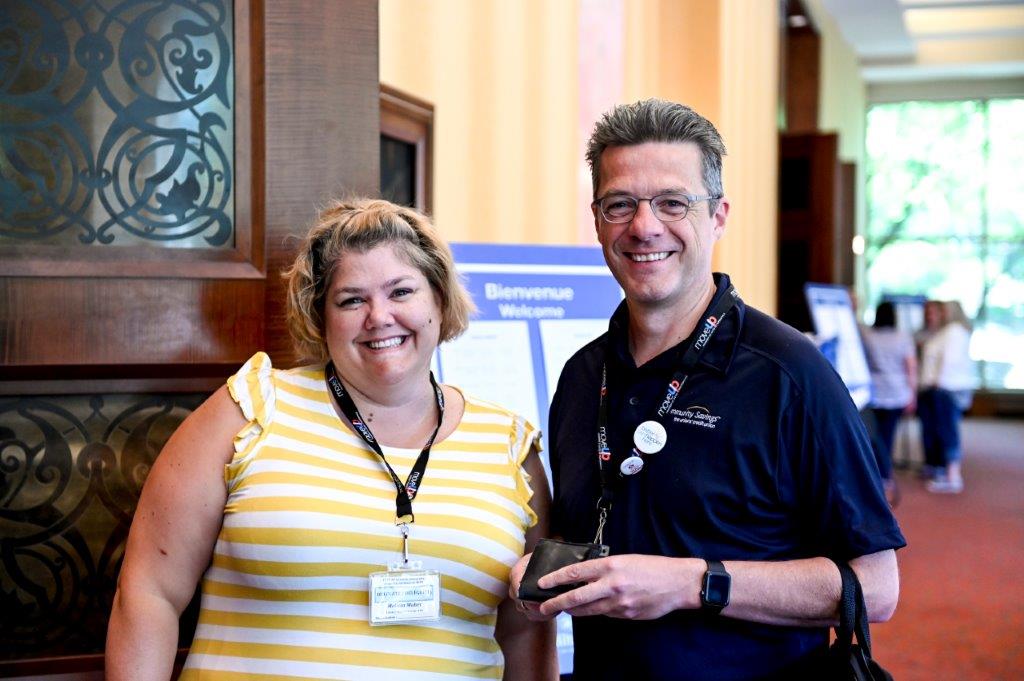 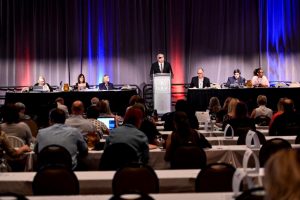 The 2019 COPE/SEPB Convention got underway on Friday, June 7 at the Hilton Lac-Leamy Conference Centre in Gatineau, Quebec.

This year’s Convention marks the 6th triennial Convention of the National Union, with 2019 being the 15th anniversary of the formation of COPE/SEPB as an autonomous Canadian union following their separation from the international OPEIU union.

Elder Peter Decontie from the Algonquin Anishinabe, on whose traditional territory this year’s Convention is being hosted, began the proceedings with a First Nations welcome and prayer to give thanks to the creator and to all creation on Earth for us to survive in the language of his peoples where.

Peter marked his appreciation for being invited to speak at this year’s Convention even though he has little involvement in unions and politics, but talked about his work experience in construction and his union experience through that. 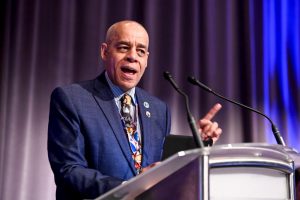 Larry Rousseau, Executive Vice-President of the Canadian Labour Congress (CLC), addressed the delegates. He spoke about first starting at the CLC at the age of 19 where he became an OPEIU Local 225 member as the only male. He spoke of his experience young man in denial of his sexuality, about getting married but having to hide the truth from his wife, and the internal conflict created where he wondered how he could fight for social justice and truth for others but not being able to confront the truth himself.

After being able to come out and embrace the truth, he talked about returning to Canada to work for Statistics Canada, about signing a union card on his very first day of work, and the pride he felt being asked to start the Statistics Canada Union LGBT working group.

Finally, he addressed the upcoming federal election and the opportunity and the threats that we, as a movement, are facing. He talked about how the labour movement mobilized to stop Stephen Harper’s anti-union program when he was elected in 2015, and how we must mobilize now – all of us in our work, our homes, and our communities – must rise up to shut down hate, to shut down anti-union rhetoric, to shut down Andrew Scheer, and to do what’s right for human rights and workers’ rights.

MoveUP President David Black, in his capacity as COPE/SEPB President, delivered the report of the National President to round out the morning. In his address, David talked about the growth of COPE/SEPB as it was now no longer in its infancy but entering adult stage and the work that needed to be done for it to continue its growth.

It is David’s dream that COPE/SEPB continues to grow beyond just its four current regions (B.C., Quebec, Ontario, and the Prairies) to also include Atlantic provinces. He spoke on updates at the CLC and the changes that are expected to come on Convention representation as its next upcoming Convention in May 2020 which will take place in B.C.

David also addressed the active role that our union must have in Truth and Reconciliation with Indigenous Peoples. He spoke about how changes in the world of work – specifically autonomy – must be addressed in such a way where we protect the interests of our members but not deal with it in such a way just to try and stop these changes but in a way that embraces, in most cases, what is coming.

He spoke on the threat that climate change poses and urged the strong support for the resolution that has been submitted on tackling climate change. He spoke about our relationships internationally pointing to the similar challenges faced around the world that we face locally, the resources we have benefited on through our international affiliations, and the help that we have provided to other unions around the world in reciprocity.

Finally, he spoke on the importance of continuing to organize to increase our strength, but not to ignore the strength that our existing members provide us. He pointed to the threats we faced from anti-union groups and politicians like Donald Trump and Scott Walker in the United States, and warned that we cannot think Canada is immune given the rhetoric used by the likes of Doug Ford and Jason Kenney, as well as what we have seen from the likes of Manitoba Premier Brian Pallister, and former Premiers Brad Wall (Saskatchewan) and Gordon Campbell (B.C.). 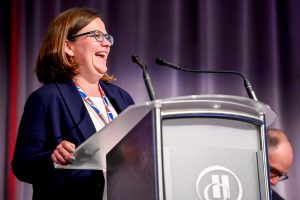 Emilie Taman, the NDP candidate for Ottawa Centre, served as the featured speaker in the afternoon. She touched on a number of issues that the federal NDP are most focused on heading into this fall’s election, among them the importance of true reconciliation with Indigenous peoples including the need for fundamental justice reform that addresses systemic discrimination, the housing crisis and the need to invest in non-profit housing, the need for universal pharmacare, as well as Green New Deal for Canada where she touched on the NDP’s plan to retrofit all of Canada’s housing stock by 2050.

She also touched on the transphobia, homophobia and anti-immigration sentiment being raised particularly by the right-wing, and left the delegates with a positive message befitting the theme of this year’s Convention – Inspired To Action – saying that to move beyond aspiration, we must all come together.

For those who want to help the federal NDP in this election year, she encouraged people to run, to help fundraise, and to help spread their messages on social media while reporting false news.

Delegates also demonstrated their support for Bill C-262 (legislation to affirm the rights of Indigenous peoples), which is currently under attack by Conservative senators, as well as for MoveUP members on the Westminster Savings Credit Union picket line fighting to save the pension plan for the next generation.

In his speech, Simon talked about the rise of right-wing politics and anti-immigrant sentiment and the work we have to continue doing to educate people so they realize that these people are just seeking a better life like all of us. 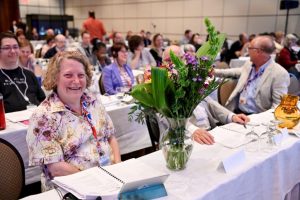 In her short opportunity to speak, she talked about helping build up the National Union’s defence fund to $13 million from where it had started at $100,000 when she first began.

A number of submitted resolutions were debated and voted upon. Some of the highlights include:

Note: Full descriptions of the resolutions can be found on the COPE/SEPB website. 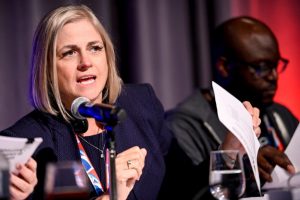 A moment of silence was held marking the loss of the members over the past three years.

The report of the National Secretary-Treasurer was also delivered, as well as the Vice-Presidents’ Reports from Regions 1 (Quebec) and 2 (Ontario) were also presented on the opening day of the Convention.